my friend’s ankle while he scouted

duck at wetland’s edge. This wasn’t the first time

the plant latched onto him – but washing his leg

with cool water and fury had always proved the cure.

This time it loiters. The green violence,

the three leaves with their subtle

side ridges, secreted oils and scalded

his canvas. He secures a bandage

over ankle and calf before work, an ambitious

gladiator boot, a war with his own skin.

At least his battle will deplete before grave.

the first morning to scratch,

accidentally irritating the site and coaxing

infection and pus. Certain the rash would fade,

he denied the red patches, but they only darkened

into identity. And maybe at first he was in the clear,

but the oils invaded his bed sheets, and dreams

are merely a return to the scene of the crime. Dead

they seep through with the excess collecting

at his sock. After our shift, he tells me how ugly

they are, the angry blotches, the repulsive flat fires

making part of him unrecognizable. We all know

the heartbeat of ghastly marks from beneath

a bandage, and so he shows me what keeps him

up at night, and we bond over the straw color

rising from the swell, taming the contagion

what the mind cannot and pastes over pain,

forgives after each return from the woods. 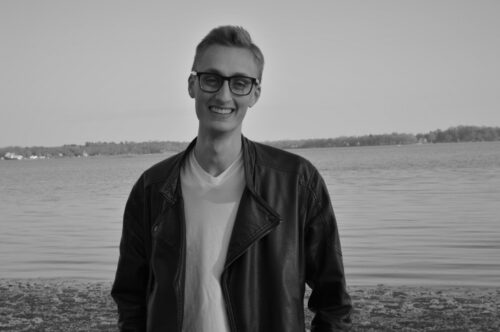 John Muellner is a gay poet living in suburban Minnesota, currently in the thick of attaining his MA from the University of St. Thomas. His work can also be read, or will soon be read, online in, Indicia, Gertrude Press, and River River.