Two Months Out of Twelve

When we heard them we knew. What we knew, we did not question. There was no mistaking the hum under the earth of the ground bees breaking through the zoysia grass, of the spreading of their lacy wings, nor of the shaking of their fuzzy bodies free from the soil they pushed through to fly. It was March. Some neighbors took to their windows to see them exiting out of the zoysia, zigzagging low to the ground as a frenzy of bees collecting grains of bare soil, carrying what they could in their threadlike legs to build their huts. Other neighbors did not go to their windows. They stayed away in dread. It was mating season. Males were mounting females. There was much going on in the leaves and it was quick. Some neighbors were disgusted. One down the street was afraid. A neighbor across the way, two houses down, started with wild gestures. Each morning, she would swat with her hand as she made her way to her car. Mid-March, panic set in. A neighbor stood on his steps and yelled something about this place looking like a Hitchcock film. The truth is, ground bees would never behave like the birds in The Birds. They have no interest in humans.

Ground bees are solitary dwellers. There are as many huts as there are bees. These huts look like ant domes, only somewhat larger. On rainy and on cold days the queens hunker down in the domes to be with their eggs. On those days, nothing happens. The lawns are quiet, until the rain and cold ends and the sunny days return.

In early April, my next-door neighbor exited his garage wearing goggles. He carried a leaf blower and used it to blast all the domes. It looked to me like he was releasing pent up anger, using the blower like a tornado, whipping it about the lawn. After, there was an unnatural silence. Then the neighbor next to him came out. He said he hoped that did it once-and-for-all. He hoped those bees finally up-and-left. But the neighbor who compared the bees to Hitchcock’s birds, had a  different notion. “Trust me, they will come out of that grass to dive-bomb us,” he said. “Either that or they’ll jam their stingers in our arms.”

The bees did neither. I don’t think they even had stingers. Many ground bees do not. When they reappeared, they minded their own business and simply sought more soil to rebuild their domes. Watching them reminded me of an adage which says that bees come from the earth and return to the earth and in between, they garden. That saying parted my heart wide open. I then saw each bee as a speck of God. So next time I caught my neighbor with the blower, I decided to share it with him. The sun was out, spilling yellow. The bees looked mighty special in the sun. So, I said it to him. Pointing down at the bees, I tried the old adage. Maybe he had heard it. Maybe he had not. We stood silent while they zig-zagged and zip-zipped above the straw-like grass. A few zoomed off to pollinate. Maybe he cared a little after that. His blower lowered. Or maybe it did not matter. I mean it was the end of April and the ground bees were winding down. A little more pollinating and they’d be through. Then they would disappear, each burrowing into their own little hut to stay with their eggs. The zoysia would green. The blades of grass would surround them like a vibrant jungle. One that would hide their village, keep them safe from the thoughts and actions of humans. 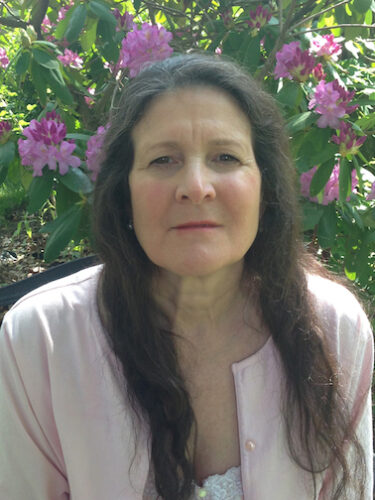 Therese Halscheid holds an MA and MFA, and has taught in varied settings, including an indigenous tribe in northern Alaska, and the Ural Mountains of Russia. Her latest collection, Frozen Latitudes (Press 53), received an Eric Hoffer Book Award. Other collections include Uncommon Geography, Without Home, and a Puddinghouse Press Greatest Hits chapbook award. Her poetry and lyric essays have appeared in The Gettysburg Review, Tampa Review, Natural Bridge, Sou’wester, among others. She lives simply by house-sitting, as to write in unique environments. Her writing often focuses upon the interconnectedness between nature and human nature. Her photography chronicles her journey and has been in juried exhibitions.