The night Nell cut her finger open, it had been two months since they’d had sex, since they’d slept in the same bed.

Isaiah dribbled past her, his ten-year-old face full of grin.

Yeehaw! He yelled this every time he scored. His open-bellied capacity for joy had gotten her through these months. That plus the gin.

In the grass, Nora, who had just turned four, offered dandelions to Asher, a soft, doughy, pale-eyed boy who waited for the world to come to him. Josh was propped on his elbows, the six o’clock sun slanting across his tired shoulders, watching his children carefully.

Good game, Nell said and let the screen door bang behind her. It was time again to feed them.

In the last months, she’d been doing mental calculations: how many gallons of milk she’d bought in her life, how many loaves of bread. Her scrambled brain threw out numbers in the thousands, millions.

All that was left tonight was the mint on the fruit salad. Chiffonade. Words appeared from nowhere these days. She gathered the leaves, rolled, folded. Yeehaw!

The mint unfurled in ribbons. The balls of melon, cubes of pineapple, pyramids of strawberries waited patiently for their final dressing. They were beautiful, deserved to be devoured.

Nell and Josh had met at a scavenger hunt during orientation. They scoured bushes for a t-shirt bearing their university’s crest. At the ice cream social afterward, they debated butter pecan. He found her in the dining hall a week later, their blue trays touching. He played his guitar, took her on long drives, played carefully curated mixes. He wanted to be a doctor.

She spent eight years moving around the country, cooking, cleaning, birthing, and raising his babies while he learned how to cut open a skull and insert a magical device that helped deaf kids hear. Back then, he worked all the time, coming home in the early-morning darkness like an adulterer. In the morning, she picked up the clothes he left in the hallway on her way to make the kids’ breakfast.

A hospital was out of the question. There was no lidocaine in the house. The skin glue was years expired and ran out of the packet in a runny mess. Out came the needle, the thread. He hesitated. In their twenty years, he had never treated her directly, never laid his hands on her to heal.

I’m sorry, he said each time he pressed the needle to her skin.

Just do it! she yelled. It hurt intensely.

He was careful, meticulous, kind. Parents cried and hugged him, and she knew why. It hurt, but not as much as pushing a human through her birth canal. Not as much as packing the boxes yet again and going to a new place so he could learn a new thing. Not as much as all the nights she got into bed alone.

The moving was over. They returned to the city she’d grown up in. He joined a family practice, worked regular hours. Her parents babysat.

Josh was still working, seeing only the patients who absolutely needed him, wearing what felt like a cheap suit of armor.

He scoured himself before returning home. He taught the kids to wash their hands. He kissed them but not her. They were like magnets, bouncing off each other even when they tried to connect. She ached, told herself this was responsible. While he slept, she questioned their logic, reviewed the life insurance policy.

Josh held her bandaged finger in both hands, pressed it to his chest. Nell felt the warm beat.

The kids appeared, washed up, took their places at the table. Sit down, he said softly, and she did. He brought dinner, cut Nora’s chicken, listened to Asher talk about bumblebees, reminded Isaiah to chew with his mouth closed. Nell drank wine, felt the pulse in the tip of her finger, soft as their newborn babies’ skulls, the thrum of things to come. 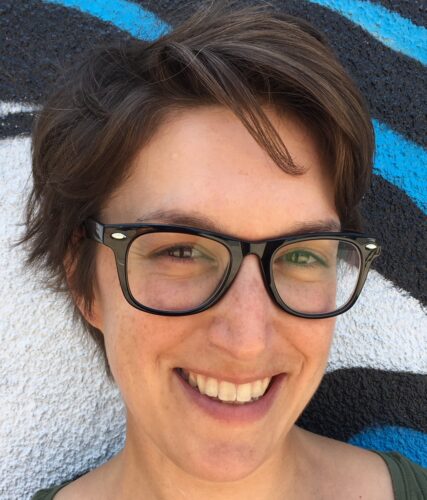 Julia F. Green holds an MFA from the Iowa Writers’ Workshop and teaches creative writing to the community in Chapel Hill and Durham, North Carolina. Find her at juliafgreen.com; @juliafgreen (Twitter); @julia.f.green (Instagram).